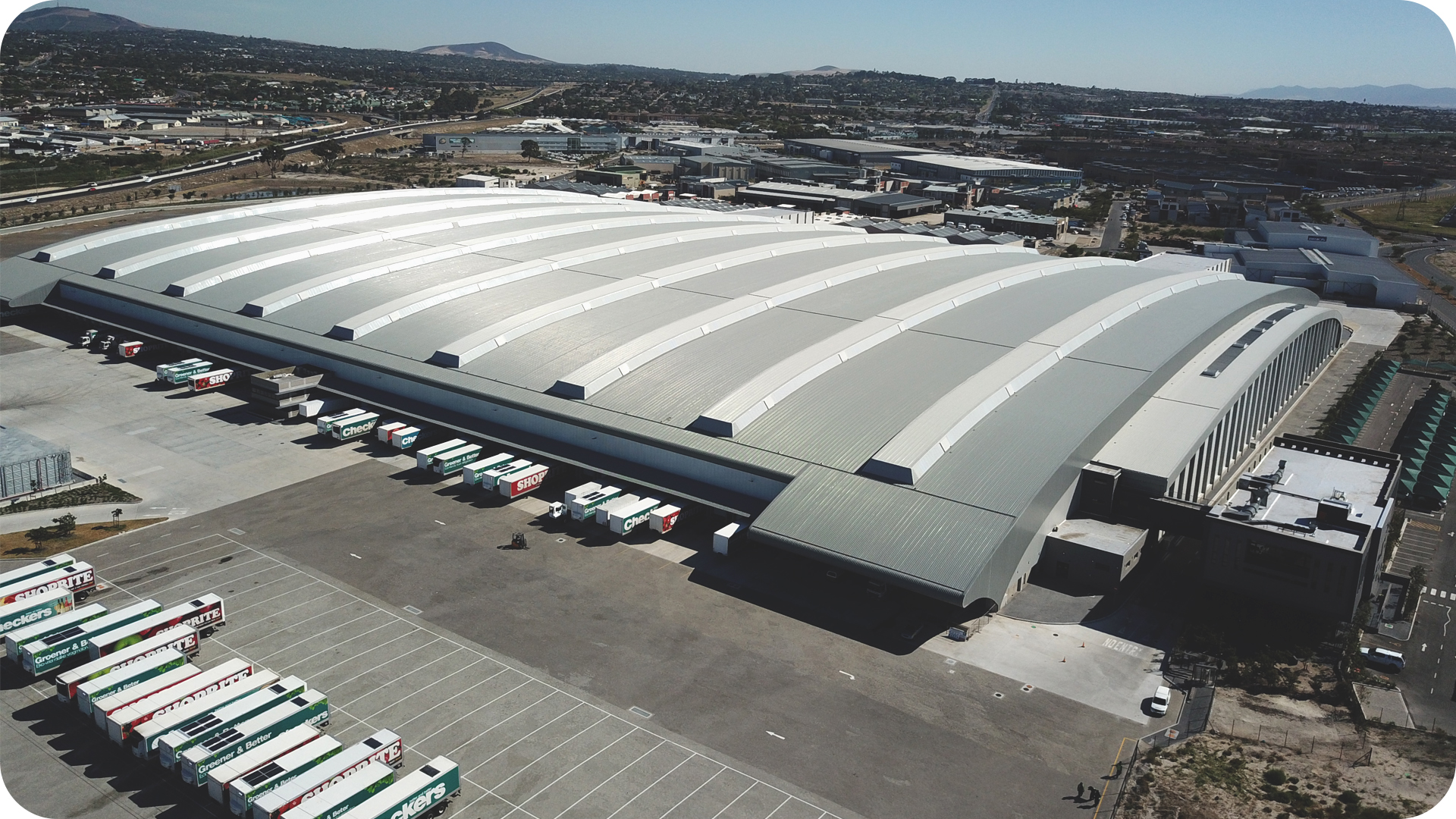 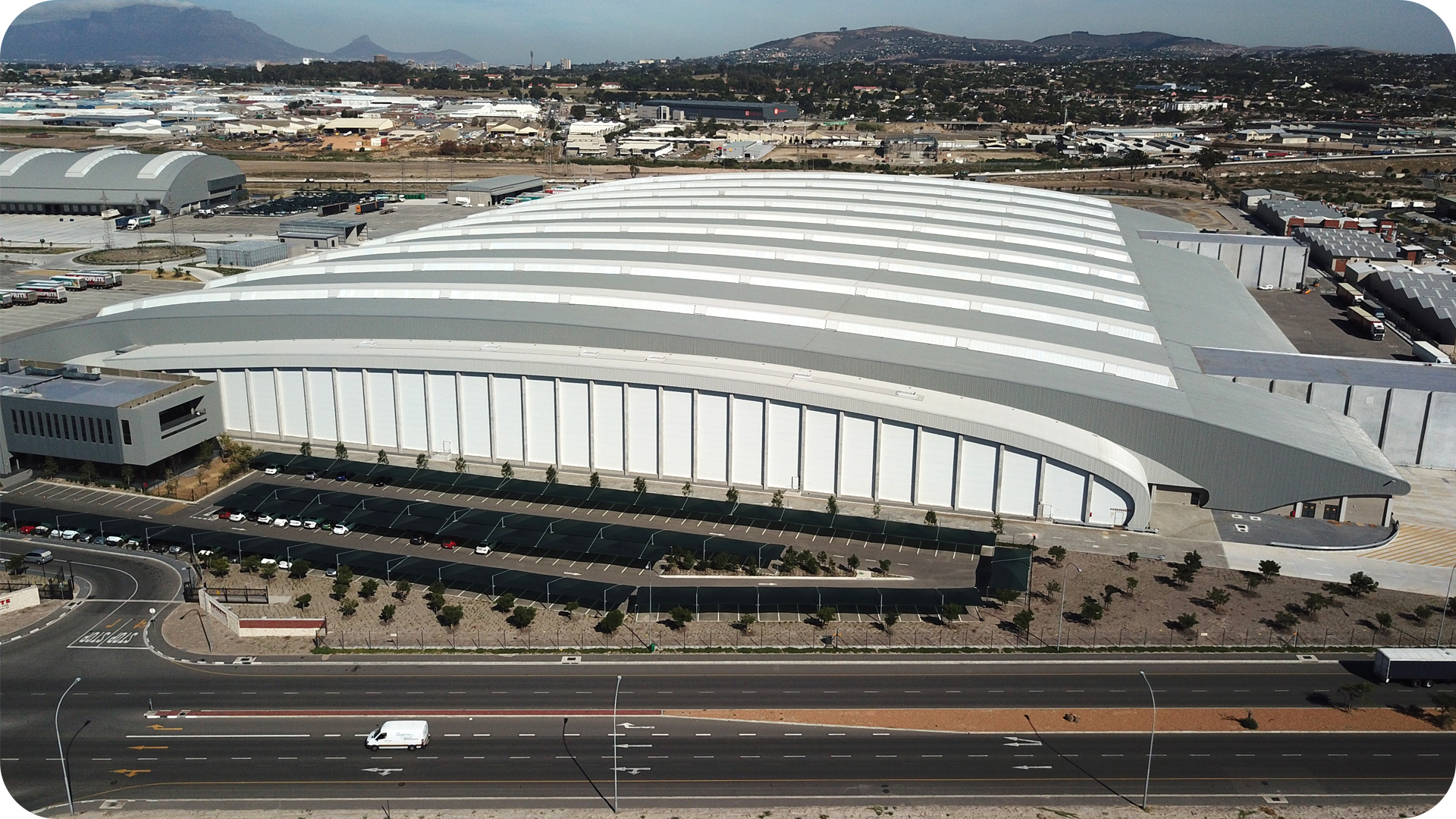 Architects and building environment professionals are looking for ways to bring individuality, style and character to their projects. This Safal Steel Project Showcase demonstrates graphically how coated steel can add enormous value to all aspects of a commercial project, while maintaining an attractive design that has wow-factor.

The Shoprite Group’s award-winning distribution ‘campus’ is named after the extremely well-known CEO, Whitey Basson, and comprises of more than 30 individual buildings. One of the outstanding features of the three major warehouses forming the core of this property are the striking curved steel roofs, which span massive areas of warehouse and are visible on the skyline over a great distance, yet blend in with the background landscape.

According to the owner/developer of the Whitey Basson Distribution Centre (previously the Cilmor DC) in Brakenfell, Cape Town, the Shoprite Group’s ability to source products from any part of the world and distribute it to even the most remote corner has changed the face of modern retail in Africa.

According to Sebastian Dockter of WSP Group Africa (the project engineers), structural steel was the natural choice to realise the large open-span roof structures and curved architectural features. The operational design required a 32x32m internal grid for the ambient warehouses and 24x24m for the refrigerated warehouse. No construction material other than structural steel could achieve the same construction economics for these light-weight, large-span roof structures, under the given programme constraints.

Due to the execution of this design being an outstanding achievement, this project was honoured with two South African Institute of Steel Construction Steel Awards as category winners in both the Factory and Warehouse and also Metal Cladding categories in 2018.

The architectural brief was to deliver purpose-fit infrastructure that is aesthetically pleasing, given the facility’s prominence from the adjacent freeway and surrounding neighbourhood. At the same time, the value of the client’s investment would need to be maximised.

The architectural and structural teams collaborated closely to allow function to define form, yet ensure refined aesthetics and a wow-factor to the overall appearance.

“The sheer scale of the facility presented the team with the challenge of blending this mammoth 125000m2 development into its surroundings. Curved lines were introduced for the roofs, mimicking the surrounding rolling hills, and effectively pulling the sides of the building down to a more accessible scale. While reducing the perceived height of the buildings the shapes offer structural and rainwater runoff benefits”, said the principal architect on the project, Niel Marx of SLT Architects.

According to the Shoprite Group media team, environmental considerations were key and a complete environmental impact analysis was conducted and submitted with plan approval to the city. A green building design approach was taken and implemented by the architects.

From a visual perspective, this was to be no ordinary ‘rectangular box’ warehouse project. In response to the client’s environmental considerations, the architects responded by stepping the building on plan as well as on elevation. They hence created a uniquely elegant vista that does not dominate the view from the daily commute on the nearby R300 freeway. In fact, by design, it takes on the form of the distant Durbanville hills.

To avoid a large flat zone on the roof, a jointless sheet transition from -0.5° to 0.5° was incorporated at the apex of the roof. A watertight installation was ensured thanks to typical step lap detailing.

In addition, the effects of temperature strain was also minimised, thanks to the step laps with the first sheeting laps occurring at slopes of more than 2°.

This type of concealed fix profile roof offers superior wind uplift resistance and the fact that the rib runs perpendicular (as opposed to the conventional method of running parallel with the sheet in the pan) changes the dynamics of the sheet and provides a one-of-a-kind solution for projects such as this.

The roof with its exceptional contour plays a vital role in the handling of stormwater, where the property utilises much of its grey water onsite, reducing reliance on potable water.

“Environmentally, there is much more under the roof. For example, to increase energy efficiency, the fire/ smoke extraction vents in the roof also let in the natural light, reducing the usage of electrical lighting” says Marx.

The use of steel dominates the walls of the major warehouses, for which the project won the cladding category in the Steel Awards 2018.

For the DGW, the largest warehouse, a 5m brick wall is located on the perimeter wall without side cladding. The clad sections of walling rise above this, looking impressive in Safal Steel Colorplus® Prepainted AZ150 0.53 Cape Grey Matt and Mountain Grey Matt also in the roof formers Klip-Tite profile.

“Safal Steel interacted with the entire project team to ensure not only the supply of coil on time, but that the finished roofing provided the client with a quality roof that maintains the warranty. As with any large roof, where sheets are 90 meters long, there are challenges faced by the roofing contractor to ensure that the roof meets all the standards required to uphold the warranty. Safal Steel worked together with the entire team to combat these challenges and find solutions that were in the best interest of all concerned” said Safal Steel’s key account manager in the Cape.

Look for the trademark. All Safal Steel prime material is branded on the backing coat – insist on Safal Steel material.

Keep in touch and stay
up-to-date with industry news.