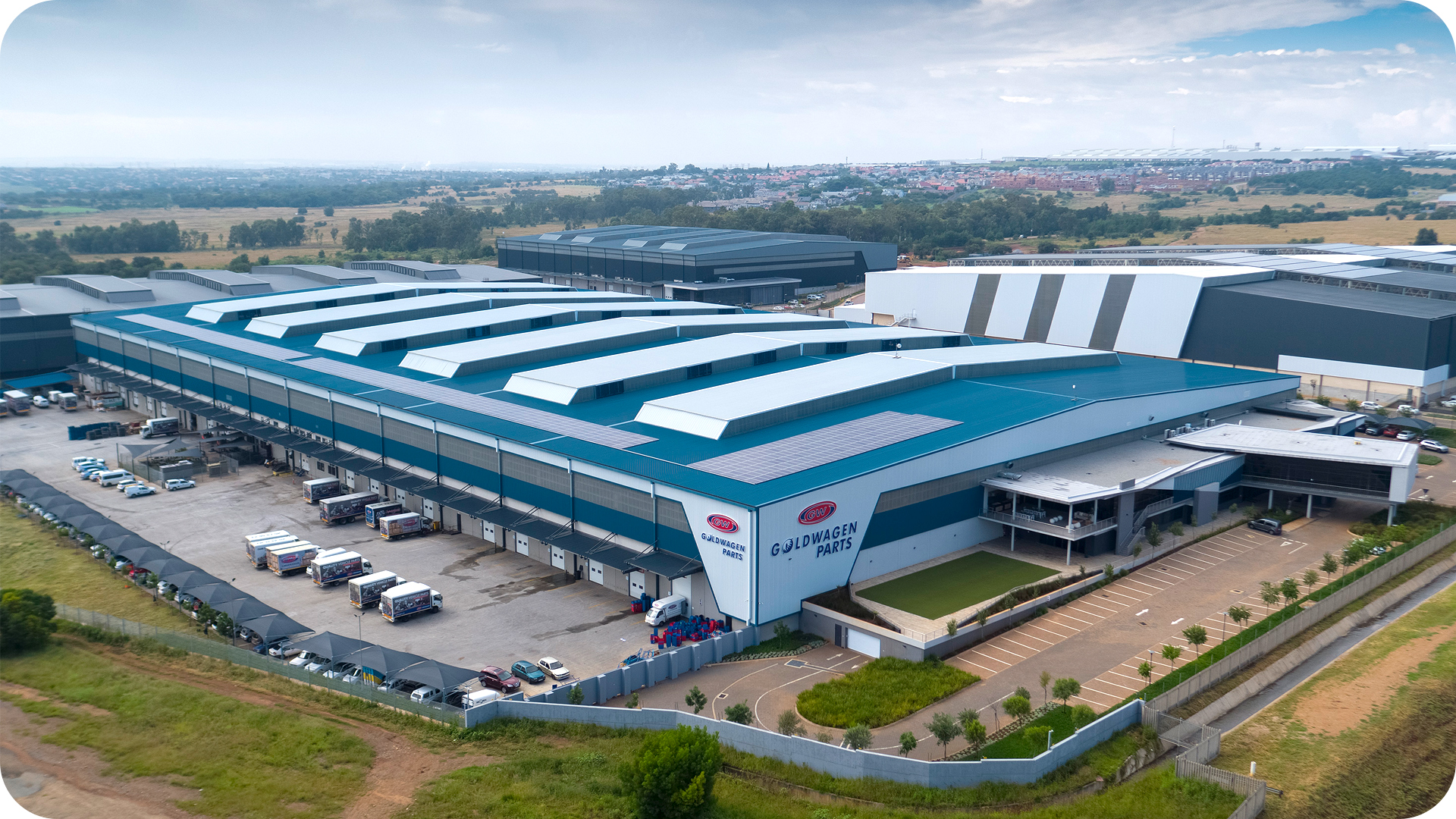 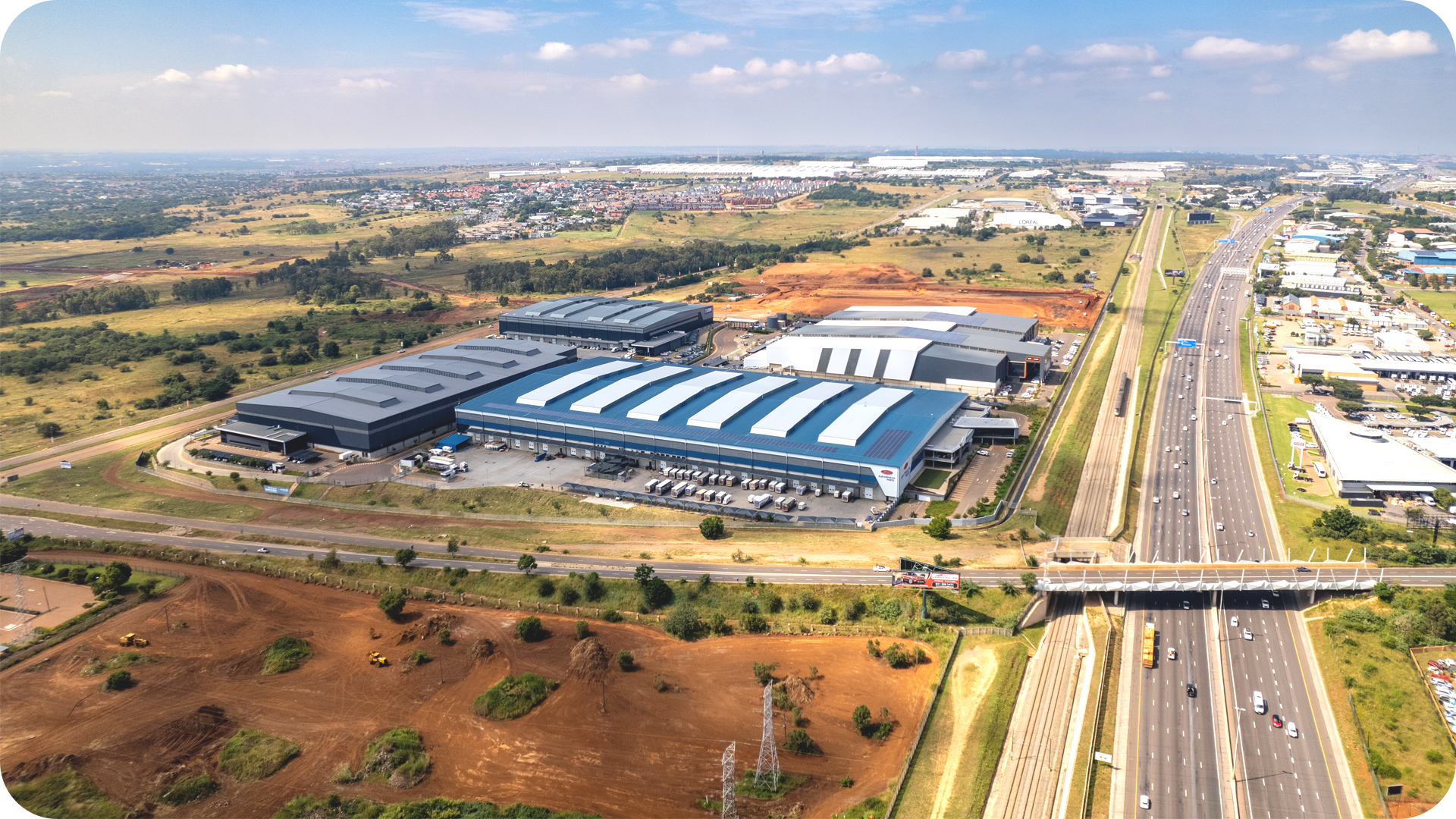 The Goldwagen Distribution Warehouse is one of the better examples of the use of Colorplus® steel in AZ100.

Building occupant Goldwagen, says that since 1992 its business has evolved into a globally recognised automotive parts distributor and franchise group with their franchised stores offering an extensive range of original equivalent parts to mechanical workshops, wholesale outlets, DIY enthusiasts, retailers, body repair shops and directly to the public.

According to Fortress REIT Asset Manager, Krishnen Naidoo, the new building was constructed within Louwlardia Logistics Park, strategically located along the N1 motorway, with easy access to all the arterial routes. Hence, this Fortress REIT development offers great visibility from one of the busiest roads linking Pretoria to Johannesburg, requiring that architects design attractive looking buildings for the public eye. The distribution warehouse in question was commissioned by Goldwagen and completed in June 2018. The building consists of both warehouse and office space.

With modern 24-hour security, tenants are protected by a dedicated reaction vehicle stationed in the park, which adds value to the buildings, advises Naidoo. The Park also has central fire tanks and pumps offering fire protection compliance to tenants at an affordable cost. Understandably then, a company with high value products such as motor spares chose to be located within this estate.

The Goldwagen Warehouse’s 28 993 m2 roof was expertly formed by Clotan Steel into its Clotan Kraftlock profile using Colorplus® Deep Ocean and Colorplus® Seaspray in AZ100 at a TCT of 0.58 mm

Naidoo says that their choice of AZ-coated steel roofing as opposed to other forms of roofing has become an “industry norm and to support energy efficiency, the usage of natural light has been maximised by interleaving steel roofing with translucent sheeting on the roof.”

Colorplus® AZ100 is typically used in inland applications within what is defined as Zones C1-C2 and Zone C3. Zones are classified as per standards SANS 9223 and SANS 10400L

Whereas zones C1-C2 are at locations of 40 km or more from the sea (“splash zone”), Zone C3 may fall as close at 1 km from the splash zone and the use of AZ100 is indicated under guidance and direction from your Safal Steel representative.

Safal Steel is a licenced user of the highly respected 55% Aluminium, 43.5% Zinc and 1.5% Silicon coated steel technology from BIEC International Inc. The company is the first and only licensed producer of this patented coating alloy in Southern Africa, which is used to manufacture the highest quality metallic and pre-painted coated steel used in roofing, cladding, and many other structural applications.

This coating on Zincal® protects the steel substrate in two ways: The aluminium part of the coating provides a tough physical barrier, while the zinc component provides sacrificial protection, also protecting the steel at the cut edges. The superior corrosive property increases the life of the steel core up to four times longer than that of conventional galvanized steel. An additional huge advantage of Zincal® or F is its lightweight nature when compared with typical galvanised steel. This lends itself to modern sustainable construction methods, promoting dematerialisation, lower transport costs, longer life in service and reducing the footprint of the building on the earth.

Safal Steel supplies a world-class product, made with South African expertise, for local and global markets. Our manufacturing processes are also amongst the greenest of any steel producers in Africa – air emissions and water usage are minimised, and up to 95% of all waste produced (including steel) is recycled.

About the Safal Steel Warranty

Safal Steel warrants its Zincal® and Colorplus®® (colour coated steel) to have a service life (prior to perforation by weathering in the natural elements) from date of installation. Warranty periods are determined by Safal Steel and may vary according to project design and location. A Provisional Warranty may be applied for at project design stage; this warranty serves as a guideline as to the final warranty Safal Steel may issue on project completion. A Final Warranty application form may be submitted to Safal Steel by the roll former on project completion, requesting Safal Steel to issue a warranty for the specific material used on a specific project.

Look for the trademark. All Safal Steel prime material is branded on the backing coat – insist on Safal Steel material.

Keep in touch and stay
up-to-date with industry news.